About a week before my second infusion (October 23)  I have devolved into a routine.   Since the first one I have begun to understand that energy levels diminish after the infusion and then recover - so I am in a recover mode at this point.  That allows me to walk a bit more - listening to a book on Howard Zinn the fraud historian who wrote the "People's History of the United States" which distorts almost everything in American history.   But the routine has also allowed me to do some more searching on the Internet about my disease.

You cannot be sure about the level of energy on any day - so some times I spend part of the day simply working at my computer and walking with Indy very slowly.   On better days I walk more and spend less time at the computer.

Our pharmacy is Walmart and they are good about sending reminders to refill prescriptions.   This morning when picking up one I had a nausea one also which I chose not to fill - the copay was more than $300 (made me a bit nauseous just looking at the price).

Last week I found an article about Acupuncture and Lymphoma and today I visited an acupuncturist in Fair Oaks.   The literature suggests that these sessions could have two beneficial effects - reducing bone pain and improving both my immunity and my energy levels.   I've been to two previous acupuncturists but I liked this guy better than the other two.  He is a lot less new age than the other two. Treatments are an odd experience - you lie down on a table and he sticks pins in you at various median points in the body.  You then nap for about 50 minutes.   You repeat those treatments about every 10 days.  The first experience was positive. 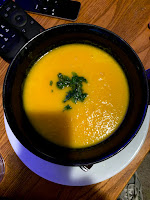 But then there are the lists.   Lots of my support group have made suggestions about diet, sleep, fun things to do, books I might like and lots of other things.   I read them and then try to categorize them - hence the lists.  I've gotten some dynamite recipes including a yellow tomato soup with pesto.  That is supposed to appeal to people who have lost their appetites.  (Which, thankfully I have not done.)

One other gift I have gotten - as most of you know I chair the board of Samuel Merritt University - a month ago I decided to step aside temporarily in part because we are in the middle of a capital project of major proportions.   The interim chair is the a physician who does not have a propensity toward financial issues - so I agreed to continue to participate in meetings related to finance issues, by phone.   The project is about the biggest thing SMU (not the one in Texas) has done in its 110 year history.  But the total cost is huge. ($310 million)  We need to find a new campus because our current Oakland one is undergoing some major changes for the hospital center that houses us.  By the way if any readers have an extra $50 or $100 million to contribute to the new campus - please contact me directly.

College presidents are known to have "edifice" complexes.   The best example in my experience came from a friend who was a Santa Clara graduate.  BT Collins was all sorts of things in California- the original leader of the California Conservation Corps, an investment banker, State Treasurer, and a member of the Assembly.   He was also a disabled war veteran - he wore a prosthetic leg and an old fashioned hook on one hand.  (indeed in one note he wrote to me he signed it as Captain Hook).   BT was always grateful because the Jesuits recognized his potential and encouraged him, after military service, to attend college and then law school.   One of his mentors was Fr. Paul Locatelli - at BTs funeral Paul expressed admiration because in all the jobs he held after college BT sent 10% of whatever he was making to the University.   When they rehabbed the law school Fr, Locatelli asked BT if he wanted to fund a capital project.   BT said of course - "let me do the urinals - it is where I did my best thinking in law school."

One of my Stanford doctors described me as "analytical" - so the lists I guess make sense.  But even if that were not there it would still be a way to organize those days when I don't have energy.
Posted by drtaxsacto at 11:20 PM