Right before Quinlan and I left DC I began a routine of working out in a gym, owned by a friend across the street from our apartment in Southwest.  That evolved when we got back to California to consider competitive running.   One of my brothers was a good long distance runner in high school and college and for at least one year I ran for my high school cross country and track teams.  Competed is probably not an apt definition - I think I still hold the PVHS record for the slowest 1320 ever recorded.  In my last two years of high school I wrestled - it was much more to my tastes and interests.

The return to California got me to try long distance running again.  I eventually evolved to compete in both Marathons and Ultras (more than 26.2 miles).   But then I tore tendons in my ankle and it ended my racing.  I tried competitive cycling, but it was not the same.  One of the delights of running is that you don't need much equipment and you can pretty much do it anywhere.   After the injury I have tried to incorporate aerobic activity into my daily routine.  For the last 30 years that has mostly been in a gym with a treadmill or an elliptical machine. With the advent of the iPad one can dispel the monotony of these kinds of machines.

As mentioned in an earlier post I am currently excluded from my gym because of a compromised immune system, part of the process that chemo is trying to repair.  And while I try to walk every day with Indiana (Mentioned Previously) there are days when he or I don't want to go out for very long. So this week I purchased a Treadmill.  (Author's note this is one area where being penny wise is foolish).   The differences in machines in the commercial grade are mostly on features but many of the home treadmills are terrible. 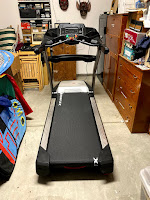 The purchase got me to thinking about the relative merits of each as an exercise companion.   The value of the dog - or simply walking is that you are in touch with your surroundings.  You get the sun in your face and car fumes.  An additional benefit is that the dog seems to sense when you don't feel like going fast, so he slows down.   The treadmill doesn't care how you feel - it is after all a machine - well calibrated, but unfeeling; an insensitive task master.  But one benefit of the treadmill is that if you don't use it for a day it won't poop in your house.

The first workout I tried on Friday, which was at a level I did in early summer, proved a bit too much.   There is an old rule about aerobic activity - if you can talk when you are doing something you are improving the oxygen efficiency of your body.   There are certainly times for anaerobic activity - especially when training to improve speed.  (Which I am not doing right now.)

So I will have to evaluate when and how to use each over time - Indy certainly does not like to be out in the cold.  This morning at 6 it was in the mid-40s and he was not all that enthusiastic about feeling the wind in his face.  For that matter, nor was I.

This is going to be an ongoing investigation, mostly likely with a mix of options depending on conditions outside, Netflix and Amazon Prime offerings and what strikes my fancy.
Posted by drtaxsacto at 11:06 AM