Some might say this is something I should have learned earlier in life but one thing this disease offers you in lessons is there are limits.

Consider this.  Last night we went to our younger grandson's baseball game (The Fair Oaks Mudhens are, at this point, in Fall Ball, undefeated.   And when you get to 11 years old the players actually have pretty good base running sense.   So the games are fun.   Last night was a Fall night for Sacramento so I brought a warm Fleece and a blanket.   Even though it remained in the 60s - I found I was cold even with all that extra clothing.  Not uncomfortable, but cold.  Also after sitting out there for a couple of hours I came home a little tired.   Yesterday was a good day and I had a lot of energy to do things - but after sitting in the relative cold - I was done for the day. 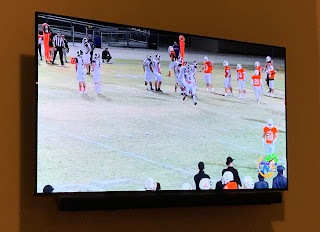 Tonight our older Grandson is playing in Woodland about 45 minutes away from us.   We thought about going to the game.   He is having a superb senior year - tonight in the first several minutes of the game he had already racked up a couple of tackles and a fumble recovery.   We love watching him play and hope that some Division 1 team will give him a shot next year.   (Did I say he is also a good student and a terrific older brother?).   (Linebacker and highlight films available.) 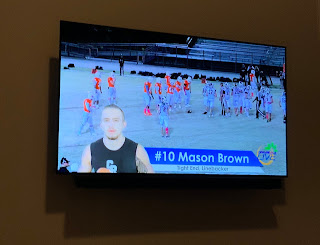 But technology came to our rescue.   Our son and his family live in an area of Sacramento called Orangevale - and through a livestream called Orangevale Live you can see the games in real time.  Orangevale Live is a Facebook area with lots of local videos including the Casa Roble football games.  Since 4K video is now inexpensive and light - a person can take a hand held to the game and shoot it for those of us who could not get to the game. The livestream also has insets when a member of the team does something good like a tackle or a fumble recovery (Did I mention he wants to play Division 1 football next year?). With SMS to our son - it was almost like being there.

At the half Casa was way ahead of Woodland - but it is a real joy to watch the game from home.   And to begin to understand that even without my disease I could think about not believing I am 25.
Posted by drtaxsacto at 9:17 PM