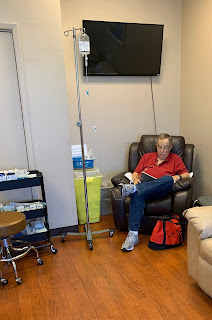 Today was my first day of Chemo.  It was a long one - it started at 8 AM.  They took a series of blood tests (in essence to see baselines especially on white cells) and then started with the Rtoximab - which takes about three hours to infuse.   They use a special needle to pierce the Port and then let the bag drip in until it is done.

Evidently, by now, they understand that pushing toxic materials into someone will cause nausea - so they seemed extra protective of making sure that did not happen.   They did two separate infusions to guard against and evidently the Prednisone also helps as does an oral prescription to use at will.

Last night when I had the final meeting with my Hematologist in Sacramento (before the procedure) his nurse recommended eating a "hearty" breakfast.   I did one of Emily's famous (mint, ginger, banana, date and almond milk - with some blackberries thrown in) smoothies and two whole grain waffles.  That seemed odd to me but evidently the new advice seems to be spot on.

One thing which struck me was the diversity of the crowd.  That should not be surprising in California.  But the mix of people in the clinic was diverse on age, ethnicity and gender and all sorts of other variables.   One of the youngest patients was brought in by his father (I think he was about 20 - and he seemed depressed).  He ultimately never looked at anyone in the clinic.  Others were chatty.  One person next to me was finishing his round of Chemo today.  There are several rooms and the morning session was full to the brim.  Oddly, I got some consolation from seeing the crowd - there were a whole lot of people who looked in worse shape than I - and a couple of looked better.  (Including the guy whose final treatment was today).

The drip is a gravity feed except for a couple which were forced in.  The whole process was painless. They have recommended a topical ointment to use before the next port infusion to ease pain - I am not sure I will use it - I have had so many needles stuck in me over the last several months that I am almost immune.

It was also recommended that I bring a couple of things - water - need about 3 liters a day around the treatment plus snacks and ice chips - one of the chemicals (Cytoxan) has some pretty nasty effects including mouth sores so they recommended the ice chips.   For some reason I could not get my iPad movies to play correctly.  I will work on that before I have to go in for a long day near the end of October.

One other comment about this process at this point.   Dr. Advani (the Stanford Specialist) commented to me last Wednesday that I was a very analytical person.   I have appreciated that with each specialist I am now using from nurses to doctors - they spend a lot of time explaining things and then responding to questions.

Tomorrow is a shorter appointment and then a follow up on the 10.  This seems like a very well monitored process.  The second session of infusion is scheduled for the 23rd.
Posted by drtaxsacto at 5:49 PM