For those who have not heard of him, John Reed was either a heroic figure of the Russian Revolution or a fake news provider.  He was a true believer in Leninism and produced a book which I read as an undergraduate called 10 Days the Shook the World (later produced as a movie by Sergei Eisenstein).  It described adoringly the revolution that deposed Kerensky.  Reed started out as a journalist but then graduated to advocacy - he was there for the Petrograd revolution - then returned to the US to tell how wonderful Lenin's vision was, was ultimately hassled by a Senate committee and eventually fled the US on a forged passport, returned to Russia and in 1920 died of influenza.  He is the only American citizen who is buried in the wall of the Kremlin.

I thought about Reed this week because I began writing a chapter for the book that my daughter asked me to write - Taking up Reed's meme I tried to name ten events that were particularly meaningful during my lifetime.  I ended up coming up with eleven each of them.  I did not include my wedding - although that was certainly important to my life.  They include: 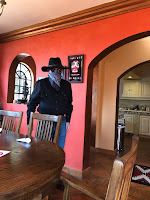 As I thought about it, although I am sure that it will offer tons of stories I chose not to include COVID.  COVID is clearly going to change things even more than some of the events on the list.   I've spent the last couple of weeks talking with my colleagues on the Samuel Merritt University regents about what the place will look like in the Fall and beyond. It clearly will not be the same ever again.   As one doctor friend told me nine weeks ago - "handshakes are gone."  Many other things will also change.   The question I keep thinking about is whether we as a people can get our mojo back - and yet COVID did not get on my list - in part because as I have experienced it so far the changes for me have been moderate, sometimes annoying, but not cataclysmic.   Ive had a couple of friends die of the disease and lots of prominent people have also succumbed - John Prine to name one.

This week there was plenty of COVID related news in SMA and California.   Last week SMA moved into Stage III which means mandatory masks in town.  The city seems to be stable in case load (9) with no deaths.   We also learned about something called "ley seca" which means dry law in Spanish.  Under it, a public official - Mayor, Governor, President can prohibit the sale of alcohol.   Last weekend for the Dia de los Trabadores - it seemed like an easy call.  The privations were huge - we actually ran out of white wine!  This weekend Mother's Day also got the mayor to invoke lay seca to prevent all those raucous moms and grandmothers from their bacchanal displays.  Compliance with the new mask requirement has been very good here - although two young men with attitude who refused to comply spent a night or two in jail.  If you walk with purpose and a mask - the officials (rightly) don't seem to bother you.

If we stay in the compound we have a pool and a complete gym with treadmill and weights.  I have ventured out to get things like fresh vegetables and to do Saturday shopping but we could easily hunker down here for a while longer.

Right now we are coming back to California in early June.   From my long distance view, I think San Miguel has managed the crisis better than California - fewer cases and fewer shortages.  That could be luck or sound policy.  There have been some odd events - like the confrontation we had in the supermarket last week explaining to the guard at the door that the three of us entering were only "vecinos" not in the same household.  But for a town with more than 170,000 people in the municipo, and with a lot of elderly expats the numbers are phenomenal.   Mexico City has not been as successful.

In California the Governor announced a deficit for the coming budget of more than $54 billion dollars. (Note the first year I worked with the legislature the total state budget was less than $6 billion.).    That amounts to roughly a 21% reduction for spending but because of Proposition 98 - those cuts to non-K-12 could be higher.  While I have generally admired the Governor's early responses to the problems of COVID IMHO he has played a bit of politics by on the on hand suggesting he was ready to open the state up but also by establishing guidelines which could be hard to implement.   He picked a fight with two cities north of Sacramento when the mayors wanted to open their cities.   I thought that was counter productive 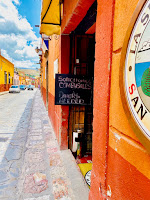 Let me be really clear, I think it is time to open the state and the nation with all deliberate speed not recklessly but we cannot have perfect safety whatever we do.  Regardless of when we re-open, there will be additional COVID deaths.   But I was struck thus afternoon walking down to get some takeout food in SMA at the difference between inconvenience and devastation.  We know who the target population for COVID is - and it is a very small group. (Based on age and medical conditions).  For most of the rest of the population the risks are minimal. We had good news this week that one company has been granted a Stage 2 test on their vaccine.  One thing the Economist pointed out this week is that there have been a lot more infected people and fewer deaths - that means the original models were way off.

On my walk - properly attired in what Quinlan calls my Señor Covid mask - I came by a small restaurant that normally on a Sunday would be filled but they had the following sign in front.

So here is the difference between inconvenience and devastation.   Most of my acquaintances have been inconvenienced by COVID.  They cannot go where they want to, it is tougher to travel, some products are not available in stores.   But Online shopping is way up (guess who is buying those things) by 22% in sales for the year.   You can't go to your favorite restaurant but they can send their food to you.   Compare that to the situation for your favorite waiter, or barber, or taxi driver - my barber in SMA is down by more than 50%; one restaurant that we love (even with delivery) is down by 95%.   I have not found a cab driver here who is not down by more than 80%.   All of these people are light on savings and light on disposable income - that isn't inconvenience it is devastation.

One other comment, which I believe many of my readers will find harsh.   I've read the documents for governors who are moving to open their states more quickly.  The press has been inaccurate in reporting the care that they have taken in adjusting to local conditions.   One of the beauties of federalism is that we can produce different solutions of different regions of the country and for different regions of the state.  But a good deal of the main stream media has one storyline which they want to perpetuate.  The idiot reporter who asked the President whether he thought it was terrible if more people have died of COVID than died in the Vietnam war, should be dismissed not just for sloppy reporting but also for an inability to make a logical comparison.   The only continuity between those two figures is the counts.  When you do read about how individual governors actually think about problems in their state you recognize that there are many options, none of which will be perfect, but which may achieve an objective for that state.

One of the things about the year before COVID is that we had some truly remarkable economic data.  For the first time in almost two decades, real wages (after inflation wages) were rising faster than the underlying inflation rate.  At one recent jobs report the country actually had more job openings than job seekers - that augers well for continued wage growth at the bottom of the curve.   But the huge numbers of newly unemployed wiped that hope out.

In the last job I had in Washington before returning to California we considered a series of what were called "choke or freeze" options.  I was working at the start of the Federal Energy Office (later the Department of Energy) during the Arab oil embargo.   We spent a lot of time looking at ways to distribute the pain - in manufacturing petroleum you have a choice between producing more gasoline or middle distillate fuels (which are used for home heating fuel).   If we produced more gasoline for people in the west, the nation would have less home heating oil for a cold winter and that would force power plants to switch to more coal.  In the case of COVID, I think the choices are much less stark.   We can either choose to open up the economy as quickly as possible or face a very long multi-year decline.  Whatever choice is going to be made, there will be costs on either side (the economy or public health) but at this point I believe we should err on the side of the economy.

Posted by drtaxsacto at 7:35 PM