Traveling in the time of COVID

Sometimes I feel a bit like Gilligan.  We originally came to SMA for five weeks - that was in March.  But when our government said "Your government wants you back" I checked with my doctors who were unanimous in wanting me to stay in place - "Why go through airports - even if they are empty". 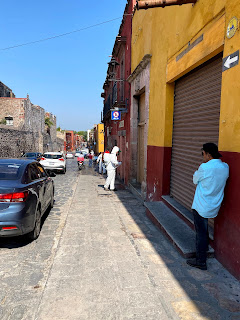 Soon after that decision the Mayor locked the city down - cancelling everything including Semana Santa (Holy Week).  That was a big blow to a city that relies on tourists. He got the city locked down inside too.  You could soon see Civil Protection, in their white hazmat suits - stopping people without masks, taking temperatures and spraying down the streets.   At one point a couple of 20 somethings walked without masks and gave the CP guys lip - that landed them in the Carcel.

We cooked at home this trip more than we ever have in all the time we have owned the house.  Our market only allowed one person per household to shop - so I got deputized.  As the weeks passed the rules got stricter.   The last time I went they asked you to wear plastic gloves.   There are arrows on the floor.  But supply, except for sanitizing wipes, on all goods was never in doubt.   Mexican supermarkets are a bit less predictable than ones in California.  So, for example, lemons are not always for sale - limes (two types) are.  And vegetables rotate a lot like they used to in the US before the global supply chain enhanced options.

A few weeks after the initial rules the Mayor established checkpoints into the city all all three roads.  He also created an order with conditions for the city to reopen.  Like the orders in the US - some a sound, others are silly.  All restaurants are now required to be certified by the city - the certification requires restaurants to reduce their capacity but also to put in shoe washing pads for patrons and for patrons to sign in to the restaurant.   He also said that until the city reaches stage 3 (we are now at stage 0) short term rentals (Air B&B) will not be able to operate.

For the past three months I have been involved in just three types of activities.   I have gotten some reading done and have completed 23 chapters of the Storyworth project that Emily wanted me to do.  At one point I did five chapters on things that motivate me.  Those chapters were much more formal (with footnotes and all!).   Quinlan read the first one and commented it looked a lot like my dissertation.   I have also walked (mostly on a treadmill) about 5 miles a day.   Finally, I spent a lot of time on Zoom - Quinlan's Knitting Group (ZOOM), my buddies who I have had lunch with for the past 40 year (ZOOM), a series of meetings on the University where I chair the board (ZOOM and WEBEX).   I have developed a new condition, which at this point has no cure, called ZOOMbutt.

The Video Conferencing space continues to elaborate.  FaceTime is good for Apple users but limited in the number of participants.  Google revised their video App (Which is think at this point runs a poor fourth - although expect them to spiff it up soon).   Jitsu is a new service that is web based, open source and free.  Microsoft has an offering that has a lot of nice integrations with other MSFT products.  Then there is WEBEX - which is mostly commercial.   As happens in other tech products - etiquette is evolving, but very rapidly.   Our kids have been using Houseparty which is fun for family chats - it has a couple of games embedded.   All of our grandkids are a whiz at video conferencing. 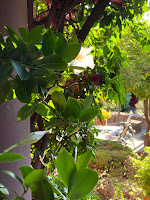 One other indicator about life in SMA came from a project we started.   We have a Sala (Patio) in the front of the house which is great for breakfast and for late afternoons.   When we bought the house it had traditional furniture which was old.  Between the sun and the elements - it is shot.   So we contacted a carpenter to build us some new stuff out of a wood called Salam (which is a very dense and beautiful wood).   Normally a project like this would take a couple of months but with the slack in the economy - our carpenter took the designs we send and will be finished a couple of days after we leave.  As you can find here easily, without going to Craig's list or Etsy, we found a woman who can make cushions.  Her work looks exceptional.  So next time we come back we will have a new patio.

For Quinlan there was one other exciting event for this trip; besides the occasional scorpions (which come inside at this time of year.   One night she came into the kitchen and saw something dart under the fridge.   Our gas to our stove malfunctioned and so we called some people to fix it - and when sliding out the stove - they found a tailless lizard in the corner - when the guys went to grab it it darted into a cupboard.  They tried to get it out humanely but it eventually perished.  The lead guy called me into the kitchen and held the lizard up and asked "Carnitas?"

At the end of March - the University board met via WEBEX and for the first time in the three years got totally engaged in thinking about a major capital project that we have been working on for a new campus.  The President and I showed them - we formed a series of task forces of the President's Cabinet and the Board to think about all the ramifications of the project.  Knowing the Regents well and the cabinet that the President has assembled over the last year - I expected good results.   But the three groups far exceeded my expectations.   Planning in this time is not simple - no one has a firm idea about how many students will actually show up in the Fall. During the time of our deliberations two independent colleges in California announced their permanent closure and if Fall enrollment is way down - several more will follow.   But the three groups were aggressive in testing the assumptions and rethinking virtually everything.  We have a board meeting at the end of this week to decide on how we will proceed. 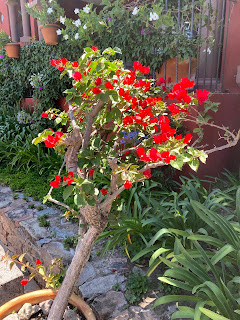 So after two false starts we decided to return to California on June 1.   We moved our tickets, rescheduled the shuttle and then started reading the stories about the disruptions in US Cities in reaction the horrible murder of George Floyd in Minneapolis. I understand and even support peaceful protest. But the rampant destruction of property is unacceptable.  Over the weekend we watched as riots erupted all over the country.   On the 31st  we found that LA (which is where we are going to pick up our car) has a curfew.  We wondered whether when we got to LA we would be able to get across town to Eagle Rock.   We called the LAPD and the dispatcher said the curfew would not apply to us.   We also talked to our son Peter and there has been lots of vandalism in Sacramento - as well as a story of a young Black kid who came downtown to help sweep up from the creeps.  That kind of story gives one hope.

May in San Miguel is usually very hot and dry - but this one thankfully has been mostly mild and we've had bouts of rain - that makes the gardens shine.  During our enhanced stay SMA has, indeed, been a sanctuary.  In many ways the City's responses have been sounder than in many places in the US.
Posted by drtaxsacto at 7:17 AM