Of Locks, Zoom and Steps 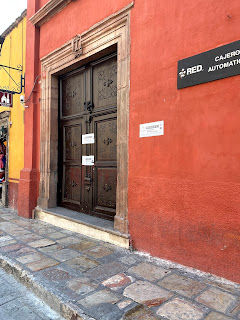 This week in the US there was a lot of discussion about when things should open up again.  I'm of the firm opinion that we should be being creative about how to open up as much of the economy as we can, as soon as we can.   I'm not convinced that any of our political leaders are trying to figure out how to make those moves.   This is not a question of scientific knowledge - we have learned more about how the disease travels in the last few weeks - a lot of very smart doctors and researchers have spent some productive time in figuring out what we need to know.  But the questions here are broader.

From my perspective we now know that the disease is not as deadly(except for some classes of people) as originally thought. The SIR model works from statistics and algorithms and as we get more data we know more.  I'm not uncomfortable with that.   The data, as more of it becomes available, is striking - high concentrations of deaths are in people over 65. (80%+) Not surprisingly places with higher concentrations of people are more likely to have worse statistics on deaths.  But those results are not uniform.  We also now understand that the disease came to the US sooner than we thought.   We should not have been surprised to learn that nursing homes are hotbeds of the worst consequences of the disease.  The NYT charts on incidence and morbidity suggest that results can vary even if some states do things differently.   Florida, which has been widely criticized for not shutting down early - they are also a state with a disproportionate supply of seniors (California's average age is 6 years less than Florida) and yet morbidity per 100,000 residents is 4 compared to California's 3.   Louisiana has seven times the deaths than Florida does,

A lot of small businesses in the US and in Mexico are paralyzed.  It is an odd feeling to have most of my friends, here and there, having the Pauline Kael effect - that is not knowing anyone who has been economically devastated by the lockdown.   Our family, fortunately, has jobs which allowed members to continue with the minor inconvenience of doing all their meetings by Zoom.   I broke down last week and bought the service and lo and behold have used it for all sorts of purposes to the tune of about 3 hours a day.  It is a real innovation.  It has even spawned the inevitable imitators (one called LOOM is just too close).

I went to my doctor in SMA to get my port flushed.  When you have one of these little devils you need to make sure they do not clot up - so about every six weeks you inject saline and then an anti-coagulant to keep it useable.   Quinlan asked about his experience and he responded "I only lost the first three patients I did this procedure on" - After Quinlan guffawed - he said he had been doing the procedure for a couple of decades.   The associated blood tests continue to show numbers in the right direction.   So now we can make a calculated decision about when to return to California.  From the news at home right now we are not in a hurry.

On Tuesday, I went down to one of our favorite restaurants here and spoke to both the owner and one of the waiters.  The waiter is really worried about when he will be able to be back and to offer his services.  He depends on the job to feed his family.  The owner told me, even with the then current requirements of 50% capacity, that they were operating at about 5%.   We ordered dinner for delivery (which was marvelous), but even that option will go away, starting Monday. 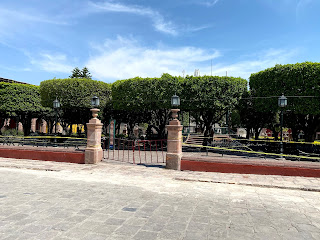 Starting next week, SMA will go into a deeper state of lockdown.  Groceries and a couple of other things will be open - but as you can see in the four pictures in this post (which are part of an APPLE PHOTOS collection called San Miguel Empty) the city is quieter than I have ever seen it.   We will be basically "restricted to barracks" - even more than we have been for the last couple of weeks.  Two banks downtown were closed by the city because they had long lines in front.  (SEE THE TOP PICTURE)   When we went into stage III all public areas were sequestered even more tightly than they had been before.   Next week there is an expectation that local authorities will begin to question people who are on the streets. 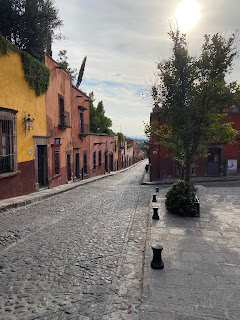 I am concerned about the seemingly blithe response to a couple of whopper numbers.  Although applications for unemployment have dropped slightly this week - the last two weeks suggested that job losses are unprecedented.  The first two weeks of numbers were in excess of 15% of the workforce and these numbers take a while to develop. (That number is now closing in on 20 million workers). In LA County one reliable estimate suggests that unemployment in the region will reach 31% by May.   The extended and enhanced UI benefits will help - but not sure what effect they will have on return to employment when we begin to come out.

We just pumped in more than 10% of GDP into the economy which moved our deficit levels to WWII levels and there is more on the way.   Interest rates are the lowest in a lifetime and oil prices went negative for a short time earlier in the week,  Public sector deficits in the states are gigantic.  In California, the Governor tamped down expectations for spending before the crisis and it looks a lot like those reserves have been blown through quickly.  That is decidedly not a political comment - on the whole I think the Governor has performed well.  But public pension plans which in California were seemingly close to actuarial solvency have been rocked again.  In the last week I've heard from a lot of university officials who breathed a sigh of relief that they made it through the Spring (two independents in California did not and announced permanent closures in the last couple of weeks).  But there is genuine concern about how many more will make the same decision based on who shows up in the Fall.

It is not all gloom and doom.   I chair a University board.  For the last several years we have moved erratically from one option to another to build a new campus.   At the end of February the board did a Zoom meeting where I think for the first time we got the entire board to realize the scope of what we were trying to do.  That led the President and me to set up some task forces to challenge the assumptions that we had looked at this project.   We do need a new campus and we should have a commitment to serving our community in the place we were founded.  But we now have a chance to challenge the assumptions going forward - how do we serve the students we have and the ones we hope to attract; what kinds of provisions should we make for classrooms/labs/ faculty and staff offices? Many of the bounds of common wisdom two months ago are simply wrong now and in the future.   But then a lot of "experts" have gotten on the web based only instruction mantra; that is simply nonsense and not any more convincing than it was when I first heard it 20 years ago.  In Spanish educators talk of "formation" and that is hard to do electronically.

San Miguel had a message from our Mayor this morning which involved a lot of speechifying.   He announced a $30 million peso fund to help support our neighbors in need. (About $1.2 million US).  I guess beyond the finger wagging - he actually made some sense.  On Monday the city goes to the next stage of lockdown.   So I got a haircut today - my barber, Jorge, told me his business is down 50%; so as I have done with cabbies for the last month I said "Durante esta pandemia quizás un precio especial."  All of us who can should be generous.   Jorge is open on a more limited basis with lots of new things - lots of alcohol and sanitizer and washing each tool in alcohol before and after.   I walked up the hill to our house and met our painter, Javier - who is now selling pizzas - we got one for dinner tonight.  Somehow lots of things here have given me hope that we will work our way through.

Finally - Kiplinger had a posting today which mentioned eleven things (Click on the link to see if you agree) which are likely to go away after the pandemic.  Some of them are surprising but they offer some food for thought (without fast food workers).