We have spent some delightful days in San Miguel - staying in place. This year has been an inexpensive visit caused by two factors completely out of our control.   First, the Dollar is in very good shape to the Peso, over the last year the relative rates have declined by 25%.  At the same time with all the restaurants closing we've been eating at home - going to the market once a week and then preparing meals at home.  There has been a rumor in town that the President may invoke a prohibition order - so we have been stocking the wine cellar.  (No we are not anticipating the hoarders)   For now, we are limited to one family member in the market.  SO I get to do the shopping.    But today is a chance to offer some reflections, not in any reasonable order.

#1 TieIns - I have been amused and amazed at the range of businesses that have tried to link COVID to their enterprise.   I received a Yelp Notification this morning which had the headline - Staying Fit in this time.  TO my great surprise
when you opened YELP I found two options for restaurants in the Sacramento Area - both of which I have been to but in previous visits I have never found free weights or stairmasters.    The YELP post reminded me that in the last couple emails I have received from a home security company, a podiatrist, and a dentist, and even a garden maintenance company.  Oddly, those kinds of activities give me hope.

#2 Sadness.   In the last couple of days we've heard of the passing of Ellis Marsalis - the father of a very successful family of classical and jazz musicians.   If you have not listened to any of his albums - you should.   I still keep an album that his son Wynton, called Baroque Duet (with Kathleen Battle and John Nelson) as a standby whenever I want to be inspired.   Last night we heard that John Prine had died of the disease.   He was a terrific musician with a creative flair for lyrics.  Paradise is the ringtone I have for my son on my phone.   My son got to see him live a couple of years ago.   John Prine suffered two bouts of cancer and became an inspiration to me.  He was one of the first artists to leave the recorded labels (starting Oh Boy Records) - so in addition to being creative he was a first rate entrepreneur.   We also lost a friend in Oakland, whose husband (Con Hopper) I first new but who was a prominent person in her own right. 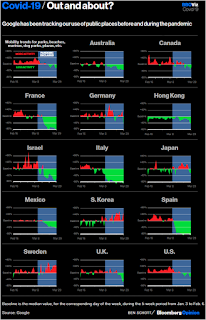 #3 Hope.  The work of University of Washington's Christopher Murray (https://covid19.healthdata.org/united-states-of-america) has been interesting.  His model has shown a slowing of the SIR model - meaning the original projections on the disease have been adjusted significantly.    Like all models they are based on a set of assumptions but his current numbers show a final result (assuming we continue to stay in place) that would produce deaths of less than 80,000.  I am wonky enough to want to understand the models - so this is a dream come true.

Our middle granddaughter dislocated her patella at the start of the week.  We were pleased with two results.  First, this young lady was a trooper.  When they popped the thing back in place - she dealt with it and is even a bit proud of the crutches she gained in the deal.   Second, we were pleased that the health system in Sacramento reacted very well.

Both of our kid's families are being creative about how to make the situation as manageable as possible.  After a few days of home schooling one our kids posted an assessment - "I would like to have one of my students sent to the office and the teacher was fired for drinking on the job!"   Humor is essential. 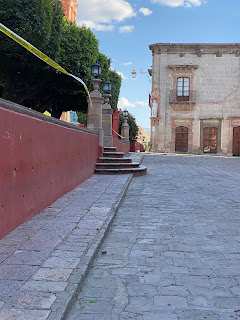 #4 Bouncing Cats - Over the last week the financial markets have recovered a lot of their initial losses - that is just dandy.   But in a conference I did with the American Association of Individual Investors last night (my video conferencing skills are improving!) we heard about the risk of a dead cat bounce.  In some downturns there is a false plateau where the markets recover and then another leg down.  The most important principle that came out of the discussion was a recognition that panic selling is really brutal.  In 1987 many investors dumped their equity positions - and those that did not saw two things - there were HUGE buying opportunities and the recovery was pretty short.  So whether this is a "dead cat" the smart move seems to be to act cautiously. 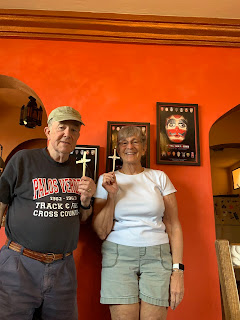 #5 Compliance.  There have been some good indications that all over the world that compliance with staying out of public places.   The Wall Street Journal's Daily Shot included a graphic  on compliance.  Perhaps more stark is a picture taken yesterday in SMAs Jardin (City Center).   This week is essential to SMA - in a normal year Semana Santa (Holy Week) we would have thousands of visitors - but the Mayor prudently canceled all of the public celebrations and remembrances.   Normally on Palm Sunday there would be 2500 participants in the Palm Sunday march from Parque Juarez to the Jardin.  The two other photos are of the Jardin (above) and the Brown's Palm Sunday procession. (Left)