It ha been a busy week culminating today with my sixth infusion.  I get accused of having odd titles to let me explain a bit on this one.   In both Italian and Irish music the meter on many tunes is six beats per measure.  So you have 6/4 and 6/8 signatures.  As you will see below I may go through two more infusions before being released.  That depends on a pet scan which will be done in the next two weeks.  I am quite comfortable with that result.

The week started with a visit from Emily and her two girls.  We went to the Crocker - which is actually a good art museum.  They had an extra week off and we had a good visit.  The kindergartener (Dylan) spent a fair amount of time on her new iPad doing numbers puzzles where you move blocks to form sums.  The older one is an avid reader (gene trait partially from Q). She read a long book on the trip up and while she was here.  Both of those kids have a great facility with language. We also went to the California Indian Museum, which is disappointing; small and often neglected compared to Sutter’s Fort, which is adjacent. 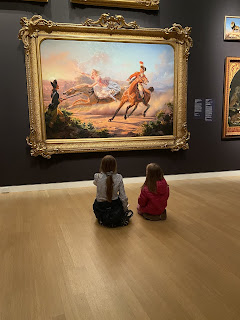 The picture at the side is of Sloane and Dylan at the Crocker. For her ninth birthday she invited one friend to go to the Norton Simon to sketch and then go to a French dinner. Both kids have  propensity to art (not from my gene pool).

Emily had to move out on Wednesday to make space for a visit from my oldest friend in Mexico.  Fr. Dermot and I have been friends for almost 30 years.  He was president at two universities and had a knack for building places.  He is now semi- retired doing some parish work and doing seminars on ethics.  On Tuesday night, before he departed early (actually very early) the next morning we had four friends over for an early dinner.

The Sunday before, we had dinner with Peter and Jessica and the 3 kids.  They are very different from Emily’s kids although both groups are well mannered.  Mason is caught up in deciding about colleges - with lots of options.  He is looking at the choices with care and he has some good choices.  His tribe was recently certified so he is likely to be eligible for some Native American grants (unlike one presidential candidate - he is one quarter Chippewa Cree.  The BIA took their sweet time in recognizing the tribe.   Nick is in sixth grade and preparing for Spring baseball - he will be a Cub this year(which makes Q happy).  Allie is fun and energetic. 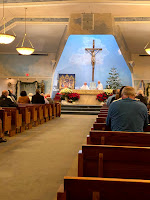 On Sunday we found a Catholic parish for Fr. Dermot to become a co-celebrant.  We went to our Episcopal service at 7:30 and then I went over to pick him up at the end of his 9 AM service.  One of the things that intrigues me about the Catholic liturgy is that priests can easily drop in.  The presiding priest for that service came from a retirement home and surprisingly had an Irish accent (from Kerry) - he seemed like a bright and charming person.

The Tuesday dinner had some discussion about all sorts of stuff - including some memories of when I first met Dermot,  The first year I was on Dermot’s first campus I was asked as a part of the Economics faculty to develop an exam for beginning students.  All of us had the chance to throw out questions for a common exam.  And after about an hour we came up with an exam which represented the issues raised by the course.  Although I did not teach undergraduates I was invited to participate,  What happened next was interesting.  The exams were numbered and then distributed on exam day.  When they were graded, the professors received a portion to grade without knowing who they were grading. - the exam was a substantial part of the grade.  No American University would have that kind of rigor.

Today was my sixth infusion.  I will schedule a pet scan to check on whether the treatments have eradicated the lymphoma if not I will do two more infusions.  I will also do a recheck with my Stanford team after the next pet scan.  So until we get the results I will be stuck in 6/8 time - fortunately I like Irish music and jigs and reels especially.

Posted by drtaxsacto at 5:52 PM