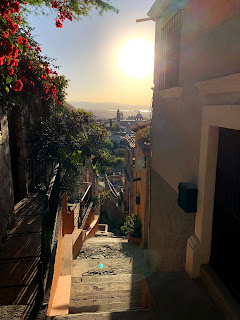 Many photographers spend a lot of time with sunsets and very little time with sunrises.  That may mean that you are more ready to take a picture in the late afternoon. But this post has three pictures where the sun is a prominent player - it fits the story.  You can guess which ones, if any, are sunrises.

Last Friday I did another Pet Scan in Sacramento.  The process has become almost routine - you fast for six hours, then get injected with a radioactive sugar which is then viewed using the equipment.  Sugars attach to the cancer cells so it gives indicators of where the nasties are.  Pet Scans involve sitting in a two stage tube for about 40 minutes.  I still have the problems of not liking small spaces.   But these are much better than Cat Scans which are noisy and a bit more confining.  So before I go in the tube I take a drug to mellow me out.

I waited the weekend for the results, in expectation but not on pins and needles(although I will confess that I had one acupuncture treatment on Wednesday).

This morning at about 6:30 the results were released.  And thankfully they were pretty clear - The Findings are Consistent with a Complete Response.   I went in for what was to be my seventh infusion this morning but before I started I consulted with my doctor.  He said, go ahead with the Ritoxin and then STOP. 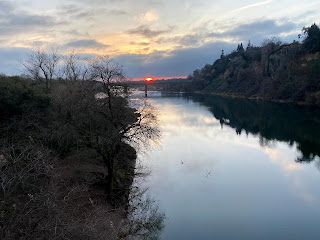 We discussed next steps.  I will see my Stanford doctor at the end of the month.  There are two ways to treat people in my condition - oddly they are at least partially counterintuitive.  Persons with low grade lymphomas are put on a once every two months infusion of Ritoxin - to assure that the little buggers do not come back for the first two years.  With higher grades of the disease once you reach the cycle of infusions - in my case the original was 6 - you stop and then get periodically checked.

After a couple of conversations with my lead doctor, we decided that the seventh infusion would be my last for now and would then decide before we go back to Mexico whether the Ritoxin prophylactic was indicated. 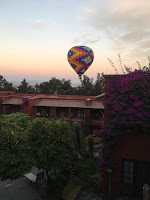 In any event I get to do a similar routine to my one after my melanoma in 1997 - when I was pronounced "clear" at that time, my surgeon said you and I will become good friends because I will check you lots in the first few years and then once every six months.   Rechecks involve flushing the port which is infused with a saline solution and Heparin to keep the port clear about every six weeks.

If I have learned three things from this experience they are pretty simple.  Wednesday in a discussion with my acupuncturist he said he had three kinds of cancer patients.  The first come in angry and stay angry.  The second come in and say woe is me.  The third understand that while many behaviors can lead the way to cancer, a lot of cancers are part of life and the older you get the greater the chance of contracting it (Something Siddhartha Mukherjee  proposed  in  The Emperor of All Malladies) and you deal with it.
He commented  that the third group were the most likely to successfully survive the
challenges of this disease.

A second thing I learned was the importance of a support network.  Mine has been
exceptional - in all sorts of very special ways.   From a bunch of you checking in
periodically and allowing me to vent a bit - to others who helped me think about
options, to a great group of medical personnel.  Gratitude is an over used word but don't
ever think that I am not enormously grateful for all of those things and more.

A third learning is based on the power of prayer.  I have had the benefit of many different
faith communities intercessing in my behalf.  Even if you do not believe in a God, those
actions help the patient center on healing.

Life is a process not an event, so I expect that there will be future chapters on this story
but at this point, I want to offer my sincerest form of thanks to all of you who have
helped me through this.  Cancer is sneaky.  So getting out of the woods takes a couple of
steps.  The monitor you closely for about two years.  If things go well  they decrease
that monitoring for three more.  Finally, at five years you go back into the
general population - at least for this disease.

We will go back to SMA in March for a very short trip, and then depending on
whether  this very good news continues, we want to be back for a slightly longer
term in the Summer and then again in the Fall for an extended period.

Posted by drtaxsacto at 7:38 AM