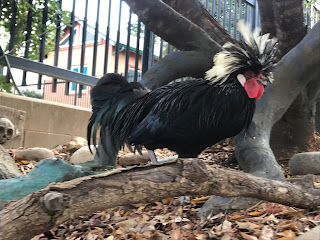 There were several developments this week.   First, I got a haircut.  Not a big deal?  Since my last one was in the summer I was looking a bit like a cross between the Great Quillo and Howard Hughes in Vegas without the nails (as a former wrestler I have always kept my nails short). (My God this blog spends an inordinate portion of its writing on personal grooming)  After my last haircut, my former barber -  who owned a one chair shop near our old house in Curtis Park, decided to retire.  He had cut my hair for almost 40 years, precipitously decided to retire at 82. (i think the events were coincidental not causative).  My new barber, who is in the Fair Oaks village, thought that after the new haircut I looked somewhat like Steve McQueen.  If so I want the Mustang from Bullit. The first picture is of one of my favorite chickens in Fair Oaks - which is a rough representation of what my own hair looked like before the haircut.

On Thursday I had one more acupuncture treatment, My regular acupuncturist was gone and thus his associate was there.  She chose to put the sounds of waves crashing against the shore,   Part of the rhythm of acupuncture is to offer contemplative music,  I find that distracting because it seems to be an endless loop of almost distinct toons.  I keep wishing the music would finish a phrase but it never does.  I found the wave sounds dandy.

Then there was the visit with my Oncologist.   As is the practice I have a visit with him to go over the numbers coming from the most recent blood test and to prep for my next infusion.  I am a numbers guy so I always have a list of questions about the numbers.   He thought things things like my “Mean corpuscular hemoglobin concentration determination” and my “Hematocrit determination” are mostly hunky dory.  (Not a medical term).  Believe it or not, in the spreadsheet I keep to record the numbers, I have put short definitions to remind me of the various meanings of “determinations”.   I feel a bit like an Economist at the WH Economics Council - I think there are 20+ stats to track - but it comes down to four key indicators;  hemocrit determination (volume percentage of red blood cells), lymphocyte percentage (white blood cells), platelet count (blood components that determine clotting) and white blood cell count (which are part of your immune system but which Chemo destroys).

We also discussed next steps. As the cards are today, here is what we know.  I do the fifth infusion on Boxing Day, the day after Christmas.  Then sometime in January I will go back to Stanford for a consultation with the Stanford team - just to see if they concur.  My doctor here thinks two sets of eyes are better than one.   That is refreshing.  Many doctors would not think this step necessary.

At this point there are probably two options - assuming that everything is positive after my sixth infusion and a third pet scan I will be cleared as being in remission.   If there are still signs of the little buggers then I will do two more infusions, delaying my return to Mexico for another six weeks.  Obviously, I would prefer the first option.  Preferences count for little here; I am fully prepared for the  second shot should it be necessary. 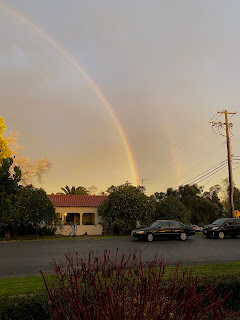 This is our first Christmas in the house that we moved into several years ago.  I had forgotten how grey Sacramento is at this time of year.  Friends in SMA say this December has been cold and grey there too.  Last December, it was cold.  You learn that in houses that are primarily stone and which have no central air or heat, it can be cold.   Our house, until the most recent remodel, which was completed last week - had only unvented gas fireplaces - which require you to keep a window open when using - and thus are not really useful for heating a house.   One of the things we did in the remodel was to add a vented gas heater in our bedroom.   But the first two weeks of December in Fair Oaks has been wet and cold.  I know friends in the midwest think cold is 40 or 50 degrees less than I do - but as a native Californian, 35 degrees is cold.

As with all things, there are good signs too.  This morning, as always, Indy and I were out and beat the coming rain. Sacramento is expecting wind and rain and snow at the higher up elevations. Then it started to rain seriously on the way to our 7:30 service.   You might ask why we go that early; for one reason I hate crowds.  For another, Quinlan then goes to her water aerobics class. As we were walking into church (by this time Indy was back in the house and dry) the rain cleared momentarily to be able to see a double rainbow.

I am a big rainbow fan.

One final comment - this morning at St. Paul's San Miguel the knitting ministry, of which Quinlan is a member, offered some prayer shawls for blessing before distribution.   For the last several years Quinlan has been a yarn mule - bringing a special kind of yarn to SMA for her various knitting projects (she is a member of two knitting groups).  One of our friends proposed to include Quinlan in the blessing and thus connected via FaceTime - isn't technology wonderful?