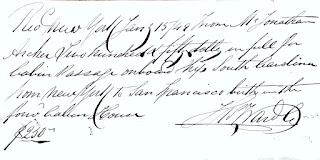 A marker for me is one of those things we all collect and leave behind which are important enough to either save or to forget to throw away.  The odd thing about these markers is that generations from now - someone may be looking at those markers and trying to decide what type of person you were.

A few years before I retired I began a project which has been in the fits and starts department for now more than a decade.  It will be, if ever finished, a note to our five grandchildren explaining five principles which have guided me for most of my life.

I was named after a relative who came to California on the Sloop South Carolina in 1849.   The photo is of the receipt that he got for passage (around the horn) for the sum of $250 (almost $8400 in today's dollars).  He left a series of letters but only lasted in Sacramento for about a year, succumbing to a burst appendix.  The letters were intermittent and one aunt spent a long time deciphering the writing so they could be transcribed.

Growing up, my mother's family had an attraction to family stories - my father's not so much.  But both sides collected markers.  When I started to check out the realities of these stories I found that many lacked key details and modified some facts.  For example that Civil War hero that mom's side spoke about (Uncle Billy) was not such a hero. But that got me thinking (obviously when you read the rest of this, not very hard) about doing a book on the five principles which have motivated me in life and then applying both some theory to the principle and some family stories which fit the principle.  I’m pretty sure the readship for such a tome will be quite limited but with E-books that is less of a problem.  There are plenty of characters in my side and Quinlan's side of the family.  The principles are straight forward and I use them frequently if not daily:
I've done some research on both my ancestors and their stories and on the principles and their origins and am not entirely steadily making progress on defining the five chapters - illustrated with family photos and stories.


The Jonathan Archer receipt(above) is one of those markers.  It has gotten me to think about my ancestor who went to California on an arduous trip.   His letters, written on thin paper and on both sides are hard to read but tell the story of his progress on the ship and in California. Life in California in 1849-50 was neither simple not pleasant.  There were no PG&E blackouts but there were also no miracle drugs, no internet, no computers, no flights and the food quality was uneven at best.
This week I got what I am sure will be another marker.   Last Friday, I did a PetScan.   On Monday I got the results.   One of my physician friends, after reading the report, said it was about as good as it could be - all indicators are heading in the right direction and several issues in the August scan have been resolved.  Before my fourth infusion on Wednesday I did the usual blood work and again, all the numbers are in the right direction including red blood cells in the normal range for the first time in several months.
But, understanding what I have found in our own family stories, I am also a bit afraid of another potential marker.  In 1972, I was included in the Volume Outstanding Young Men in America. Normally I am skeptical of these kinds of recognitions.   I once had a friend in DC who worked for HEW but signed himself up on the attendance sheet of some interagency meeting as Deputy Assistant Secretary for Aircraft and Sewage and within six months began receiving invitations on Aircraft and Sewage issues.  But I filled it out anyway and was included and got the certificate (suitable for framing).   In 1973, I got a solicitation from H. Pettus Randall III (who I had met in Key Club when I was a Lieutenant Governor) which invited me to nominate an outstanding young man that I knew - so I nominated Alfred F. Katz, who had a PhD I Seafood Processing and he an his wife Susie were active in Zero Population Growth (they, as you may have guessed were our two cats at the time) - and in the 1973 edition Alfred got the Citation. The thing like many honors in our culture was a sham - a way to sell books so that winners could see their names therein.  So not all markers are the same but the one from Sutter is certainly a keeper.
Posted by drtaxsacto at 3:51 PM