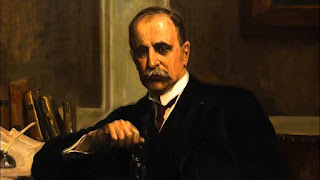 I slowed down a bit this week after the third infusion.  That gave me a reminder to exercise patience - there is that word again.   What follows are some personal reflections on patience and progress.

Boomers grew up in with a naive sense of the direction of progress.  I remember very clearly of DuPont “Better Living through Chemistry” or the exhilaration of JFK saying we would go to the moon or even the first time I went to Disneyland and looked at Tomorrowland. All gave us a sense of the immutability of progress and that all new things were dandy.  But sometime in the 1970s evil old Thomas Malthus re-emerged.

Malthus, you may remember, when trying to influence a parliamentary debate on the poor laws created his famous and fundamentally flawed treatise which argued that human procreation would exceed innovation.  In the 1970s you could see him all about.   Paul Ehrlich claimed in the Population Bomb that the earth would extinguish itself by the turn of the millennium, or at least humanity would be severely challenged,  When challenged by an economist at the University of Maryland - his silly predictions proved to be at best speculation.

In the 1970s something called the Club of Rome, a group of thinkers who describe themselves as an "organisation of individuals who share a common concern for the future of humanity".  Their 1970s report mirrored many of Ehrlich's conclusions but economists like Robert Solow, to name just one, pointed out the obvious flaws in both the thinking and modeling.   A group of prominent mathematicians ridiculed the model on some fairly esoteric grounds.

Malthus’ work was wrong, in part, because he relied on bad data (evidently Benjamin Franklin gave Malthus US Census data which did not correct for population changes - the US got a lot of people coming here between our first census and when Malthus published his Treatise).  But he was wrong based on two assumptions held y lmost all  Malthusians  - first that something that is evolving can be finished (I am constantly annoyed when people assume that “the science is settled" - good science never is) and as importantly that we won’t be snuck up on by epiphenominality.   That is an awfully long economics word for what a graduate student I had in the 1980s called “Who’d a thunk it?”  Those things in life that happen unexpectedly are always outside the perfect models.

To be fair, some of the caution and thinking on limits that began in the 1970s might have been justified but as someone who believes in the power of markets, the quantity of some in this instance is very limited.

So why is all this philosophy relevant?   As I said at the opening, after my third infusion I slowed down a bit more than I had in the previous two.   That was conditioned on two points of data - one - the fluid weight gain I get when they infuse me with all that stuff did not melt away as it had in earlier infusions.  At the same time my walking on the weekend was a bit slower.

Those two data points were better this morning.  But I was also reminded by Quinlan (you will remember her) that I get some real scientific data starting next week.   The first is a pet scan (discussed in the last note) on the day before Thanksgiving which will give a picture of what is going on inside.  The second is an echocardiogram - which is another piece of data (coming in early December) to give a picture on whether the stress involved in getting rid of my disease has been appropriate.

I was never much of a student of science - so since my joining the Samuel Merritt University Board (SMU) and having this disease I have become more interested.  The image above is of the Canadian doctor, William Osler, who founded the Medical School at Johns Hopkins.   He was the guy who thought it would be a good idea for future doctors to actually have some clinical experience;   A good idea to advance medical practice.

Soon after I joined the SMU Board of Regents the retired dean of the UC Berkeley School of Public Health recommended that I do some reading on science.   I wondered whether I really needed to being that I took an introductory course in Biology in 1964.   I asked whether things had changed a bit since then.  He indicated that they had.

He recommended two books - Siddhartha Mukherjee - the first (The Gene and Intimate History) gave a layperson’s understanding of gene theory.  But then I found The Emperor of All Maladies: A Biography of Cancer.  In that book Mukherjee gives a detailed history of the treatment of cancer.

The book gave me two conclusions.  First, progress in the treatment of cancer for the first several hundred years was not continuous.  We went on some fairly bizarre and horrific modes of treatment.   But in the last decade progress has been phenomenal (as opposed to epiphenomenal - although some of the biggest steps forward came through after hard work coupled with good luck).   But second, as Mukerjee mused at the end of the book, the end of cancer may not be in our sight - as we whack one cancer mole - new variations evolve.

So I will wait for the real data.  Patience.

Posted by drtaxsacto at 4:39 PM