We arrived in San Miguel, as the last post suggested immediately after I got the all clear from my Sacramento and Stanford doctors.   But when we arrived we found a changed environment.  In the middle of this week I went to my San Miguel doctor (speaks seven languages) to discover whether I could find a resource to deal with the every six weeks port cleaning required for maintenance of the port they inserted to deliver Chemo.  All the doctors said it would be a good precautionary measure to keep the thing in for a while.  Turns out my doc who works with stem cells is fully prepared to deal with that process.  So that was checked off.

But we also got an initial note from the Mayor who imposed the first phase of a set of orders to contain the virus.  He cancelled all public events (that includes all religious observances and all parades) and he suggested the usual wash your hands, social distancing and good food and diet.  When I saw my doctor here he suggested that we establish reasonable distance from social media (which seemed to me the most promising strategy!).

What has amazed me is how the story of Corona developed, here.  When we came into Leon there was a health official scanning temperatures of all arrivals.   But the rest of the city was about normal.   We went out to dinner with some of our oldest friends one night and then went to our parish on the first Sunday we were there.  They immediately announced that would be the last service until the crisis passed.   Our home parish in Folsom was even a bit more ahead - they live streamed the Sunday service on Facebook (https://www.facebook.com/trinityfolsom/videos/241275083693758/).  I am not a fan of Facebook, which I think has helped to degrade pubic dialogue - but this seems like a great idea.
About a week ago we were in one of our favorite restaurants and just as we finished dinner a gusher started - there were no cabs and we did not have an umbrella.  One of the other patrons suggested UBER - so we dialed in and after only 35 minutes a guy showed up.  The waiters made fun of the APP because when the gusher stopped there were plenty of cabs available.  They kept stopping by our table and looking at the APP.

In the middle of the week the Mayor jumped things up a step to ask all of the residents to mostly stay at home.  We talked to our maid and said don't come and we will pay you until the emergency subsides.  We also went to La Comer to get supplies - not like in the US.    We've seen the pictures all over the net of empty shelves and regulated lines.  The lines here for Costco are limited but supplies of everything from TP to fresh fruits and vegetables is in normal supply.  No hand sanitizer and no anti-bacterial wipes but everything else is in abundance.

When we were in the market today lines were a bit below normal.  Everyone kept their distance but shopping was orderly.   Last Sunday I had heard that one of the markets below us had wipes so I walked down.  There were six packages on the shelf - I chose one.  And then, what are lovingly called San Miguel Swells (An expat with an attitude) scooped up the remaining five.  I asked somewhat malignly - "stocking up before the hoarders?"  She shrieked " That's not funny (it was not meant to be) - this is a health emergency!!!!!!!"  I wondered why she felt entitled to clean the shelves.

Tonight I went for a normal walk and talked to a couple of restaurant owners both have decided to close down for a couple of weeks.  I expect more of those will come - although I spoke with one owner who said he is remaining open and several others are offering take out.

When SARS hit Mexico, SMA closed the city for a week to 10 days and required all people to stay off the streets - and that was strictly enforced.  As a result the incidence here was reduced over other places in the world. 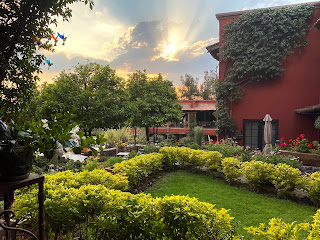 We thought long and hard about whether to return to California either on our original flight or sooner - but we ended up rejecting that.   For now we will remain in place until income tax day.  There are a couple of reasons.  California looks like it is in the panic mode (do not get me wrong many of the Governor's actions seem justified).  At the same time we have a very good community here.   And then there are the sunsets.   Last night we were sitting on the Sala (Patio) and I caught this picture.  It kind of sums up our place in SMA.   In this complex we have a gate and a pool, a treadmill and free weights and a fridge stocked with food and a wine cellar that could last us for a couple of weeks.  We also have reasonable internet coverage (although right now no landline).  Down the street there is a superb vegetable and fruit market (that also has a butcher).  So even if we are completely confined to quarters - it could be better than returning to Fair Oaks.  Did I tell you our daytime temps are in the low 80s?

We are living in novel times (pun absolutely intended).  What intrigues me about the situation is how thin US society seems to be at the outset - the TP runs are not good indicators and yet I've seen some absolutely amazing responses from families who have organized activities for their kids while at home.  I've also been amazed at innovations like the one above from Trinity Folsom - which immediately organized a way to serve its community without missing a beat.  At the same time I immediately grew tied of what my oldest brother calls media "expects" - what Eric Hoffer used to called "learned ignoramuses" who are ready to spout a network's existing theory about what will happen next.   We've seen again that there are some very good public officials and some bureaucrats who seem to be there to press their agendas. 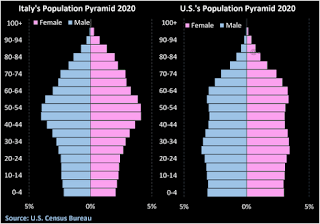 In this age of Instant Analysis we want surety. Too bad, it is not going to happen.  What I have admired in the last week has been a couple of researchers who are willing to test the wild-eyed claims of some of the "expects".   The chart at the right shows some demographic differences between Italy and the US - and offers at least one potential hypothesis why Italy has had such a huge outbreak and disastrous results.   Thinking more about these population curves might offer a more targeted response to the immediate threat.
A second promising approach appeared this week from two university researchers tried to do some "curve fitting" on the data that we have on how the virus grows and seem to suggest that the claims of exponential growth are overblown.  (https://doi.org/10.1101/2020.02.16.20023820. )  A follow up study by three Italian researchers - published yesterday - also brings into question the apocalyptic yammering of some of those expects.

One thing is for certain - we are going to have to be creative to respond to the threat(s) not just to 19 but to the threats of living in a complex world. In my mind that does not include figuring which bureaucracy screwed up.   We can assess blame after the virus is better contained.